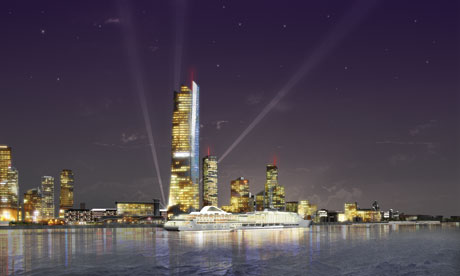 The £5.5bn Liverpool Waters scheme has reportedly been criticised by Unesco team

Unless radical changes are made to a plan to build a series of skyscrapers alongLiverpool's famous waterfront, the city could lose its world heritage status, according to a delegation of inspectors fromUnesco.

It is a fate that Liverpool is keen to avoid as the world heritage status places the city that spawned the Beatles alongside the Pyramids and the Great Wall of China. It is crucial to marketing the city to visitors.

The three-day inspection last week, led by Ron van Oers, left Liverpool with the message that unless Peel Holdings's £5.5bn Liverpool Waters project is radically changed Unescowill recommend the city should be stripped of the status, according to the Liverpool Daily Post.

Peel Holdings' scheme, which will be considered by the council's planning committee in January, regenerates the deprived northern docklands by building shops, restaurants and offices. The company has already reduced the height of its controversial Shanghai Tower (which aims to replicate the Chinese city's dramatic waterfront) to 55 storeys.

But sources said the inspectors were unimpressed by the huge buildings. The Unesco inspectors will produce a report shortly before Christmas and it will be sent to Liverpool council and Peel Holdings.

The company, owner of the Manchester Ship Canal and the Trafford Centre, has previously said it will not compromise any further on the scheme.

Speaking during the inspection visit, Van Oers warned that Unesco's decision would have significant implications for cities around the world. "The way that the world heritage committee will eventually rule about this case is going to be part of case law that is going to be used by the …committee later on," he said.

The committee will vote on its findings in June 2012.

Liverpool's world heritage site officially stretches from Albert Dock, which has the largest collection of Grade I listed buildings in the UK, along the Pier Head and up to Stanley Dock. It takes in the elegant Edwardian "three graces": the Royal Liver, Cunard and Port of Liverpool buildings, which have defined the view from the Mersey for almost a century.

Dresden lost its world heritage site status two years ago after building a bridge over the river Elbe.

Liverpool council's leader, Joe Anderson, said: "I think we can reach a compromise, but Peel have already compromised. I think the scheme is a game changer. It's a catalyst forregeneration for years to come, that is how important it is."

"Without doubt, it is a very good thing to have the world heritage status and I'm sure it's helpful in sharpening the city's image," he said. "But we cannot be preserved in aspic and we have to have development."

In the past decade, the city centre and waterfront have developed beyond recognition.

"It is good to have world heritage status, but we must also have development, and investment in north Liverpool is tremendously important. But it would be a pity if the plaque on the waterfront was taken away."

He praised the development on the waterfront with the Kings Dock, Arena and museum but said that north Liverpool "is the nut we still have to crack" in terms of development and economic growth.

Tourism is worth £3bn to the economy in Liverpool and 42,000 jobs depend on it. When visitors are asked why they come to Liverpool, many cite the world heritage and capital of culture designations.

A spokesperson for Unesco refused to confirm the delegation's finding during the visit: "We don't issue statements or discuss the finding of such missions as they are first presented to the world heritage committee."